When I was a kid, we had a cable box. Cable companies were feudal things back in those days, yet to be swallowed up and homogenised by Virgin Media, and so the channel selection was spotty and reception was poor. It didn’t matter to me, though, because I had The Children’s Channel.

There was some original programming for “TCC”, as it later rebranded itself, but even with limited running hours it was still faced with a daunting task – finding hours and hours of TV programming when the BBC and ITV had already hoovered up the A-grade material. The Children’s Channel may never have had a Knightmare or a Thundercats, but it was very willing to plunder shows from Canada and Europe.

That’s why, while most kids at my school were watching Transformers and Fraggle Rock, I was engrossed in post-apocalyptic French anime and surreal puppet shows. Today I’m going to wander down memory lane and highlight a few of the most memorable – “best” is a word bandied around too readily in this day and age – in the hope that someone, somewhere might also remember them. Frankly, I’m starting to think I dreamt Telecat, and I’d rather not have to pay the psychiatrist fees.

Not too obscure, this one. I’m easing us in. Smoggies was a Canadian cartoon with a ham-fisted environmental message; some modern day humans had come to the idyllic island of the Sun-Tots because their haughty leader, Emma, was after a magic coral that kept you eternally young and beautiful.

The magic coral didn’t actually exist – it was implied that it was clean living that stopped the diminutive Sun-Tots from aging, but the Smoggies’ various schemes to uncover its location almost always resulted in Things That Were Bad For The Environment, like dredging the sea with huge nets and getting dolphins caught in them. And, I dunno, smoking.

Naturally the Sun-Tots always had the last laugh before going back to their never-ending purgatory of peace and harmony, but I can’t help but feel that Emma had a point. I mean, she and her henchmen had stumbled onto an undiscovered race of immortal midgets, and it’s entirely conceivable that there was some sort of environmental factor at work. I don’t think the show ever had an ending, as such, but I’d imagine it’d involve the Canadian military descending upon Sun-Tot Isle and dragging the hapless mutants away to be dissected.

As ever, the intro song explains the premise of the series: http://www.youtube.com/watch?v=kZi79ZaP1fI

4. SPARTAKUS AND THE SUN BENEATH THE SEA

Quick history lesson: during the 80s the French had a bit of an infatuation with anime, and a lot of shows picked up by The Children’s Channel were either done in that style or, in some cases, co-productions between France and Japan. This is one of those shows.

An ancient race of humans had fled underground to escape some natural disaster or other and, as you do, built a subterranean sun to power their civilisation. When the sun starts to fail, and with no-one left underground who remembers how to fix it, they create a young woman named Arkana and send her to the surface to find help. (Lazy.) Arkana befriends two children, Matt and Rebecca, as well as a mysterious traveller named Spartakus, and they return underground to try and stop everything exploding. (The sheer trauma Matt
and Rebecca’s parents must have faced when their kids went missing is never touched upon.)

This programme blew my tiny child-mind, because it was pretty much the first serialised cartoon I’d ever seen. Like its better-known spiritual cousin, The Mysterious Cities of Gold, it had a proper ending and genuine jeopardy. Looking back on it today it’s easy to be dismissive of the low production values – although the show had some great art design, it was also perfectly happy to pad itself out with bizarre “music videos” sung by the villains and sidekicks whenever the episode was running short.

Oh, and the trilobite-shaped ship they used to fly around on was called Shagshag in the original French version. Just saying.

Known as Bleu, L’Enfant de la Terre in its original French incarnation, this was seriously messed up.  Set on a post-apocalyptic Earth with a heavy anti-nuclear subtext, the opening theme made reference to a “great mistake” which had all-but wiped out humanity. It still didn’t explain the abundance of monochromatic elves, the fact that they flew around on robot cats or that their arch-nemesis seemed to have a magic chessboard in his throne room that showed him what was going on.

Oh, and there was a henchman with a little additional face next to his actual face who looked like he’d escaped from He-Man. Man  E. Face’s distant descendent, possibly. I’m not sure if the series had a plot arc, as such, or even what motivation anyone in the show had to fly around on cybernetic housepets firing lasers at each other.

Here’s a clip of the first episode, which appears to contain Dobby the House Elf and confirm that the bad guys live on the moon. It’s in French.  IT EXPLAINS NOTHING: http://www.youtube.com/watch?v=0s6uvDYT_IA

As far as original programming goes, this was a stroke of genius; sit two kids down in front of a couple of NESes, dress a man up like Mario while he provides the commentary and simply have the contestants race through the game’s levels, or try to out-do each other’s high score.

Okay, so watching people trying to dig through Mario 2’s tedious desert sections was not, in hindsight, all that fun. But when US teens were flocking to the cinema to see The Wizard, we got our first glimpse of Super Mario Bros 3. Through cable TV. By the time of the PAL release, I practically had the first world memorised just from watching those lucky buggers playing it.

Relive the heady glory via this dour Youtube retrospective: http://www.youtube.com/watch?v=bMkUxjBU-gY

At the top of this teetering pile of obscurity we find The Matics, a French educationa cartoon designed to teach children the basic principles of binary, computer memory and
base two maths. Eat your heart out, M.A.S.K.

I can’t find an awful lot about the show and, thanks to someone still trying to flog it as a valuable educational resource 20 years later, there aren’t any clips of it on Youtube. Or maybe that’s just because no bugger remembers it. I do recall the titular Matics being like square crocodiles that could be adorned with either a 0 or a 1, though, and how they were enslaved in the thousands in some 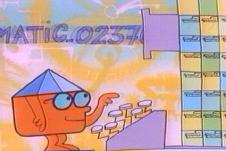 guy’s quest to build a computer.

The animation was crude, with a decidedly Soviet twang to it all (anyone who remembers the Simpsons’ “Worker and Parasite” will be pretty much familiar) and the episodes built on each other in such a way that if you missed one, you’d be highly unlikely to understand any of the others. Still, it’s hard to begrudge TCC for showing it – if I’d watched Thundercats as a child instead, who knows if I’d even be remotely interested in computers now?

I’d probably be a superhero instead, but that’s quite beside the point.

Game Designer and Writer.
View all posts by Taskbaarchitect →
This entry was posted in Articles. Bookmark the permalink.
Loading Comments...