Animal Crossing 009 – Catcher in the Rye

Posted on October 18, 2011 by Taskbaarchitect

It’s been a while since I’ve had a chance to put together a blog post, but that doesn’t mean life’s been anything other than hectic in the madcap land of Twycross. As we start our yearly march towards Ragnarok and the Devouring of the Moon, mankind likes to cheer itself up with harvest festivals – and the animals in my village feel the same way. Time for the Fall Sports Fair!

Rather upsettingly, my character wasn’t actually invited to take part in any of the four events that’d been teased so invitingly on the town message board – Aerobics, Footrace, Ball-Toss and Tug-o-War were open to the animals but I, a newbie human villager, wasn’t able to participate in the proceedings. While it was nice to see the villagers doing something other than wandering about I can’t help but feel it was a missed opportunity for some new mini-games and a chance to win rare stuff in a manner more involved than shaking a couple of trees.

Mayor Tortimer apparently felt sorry for me and gave me an Autumn Medal just for showing up, but it felt very much like a consolation prize – pretty much like every other Sports Day I’ve attended, actually, so maybe the game’s more accurate than I’m giving it credit for.  The day after the fair, everything was noticeably more autumnal – except for the ground, which had decided to turn bright pink in defiance of botanical protocol. 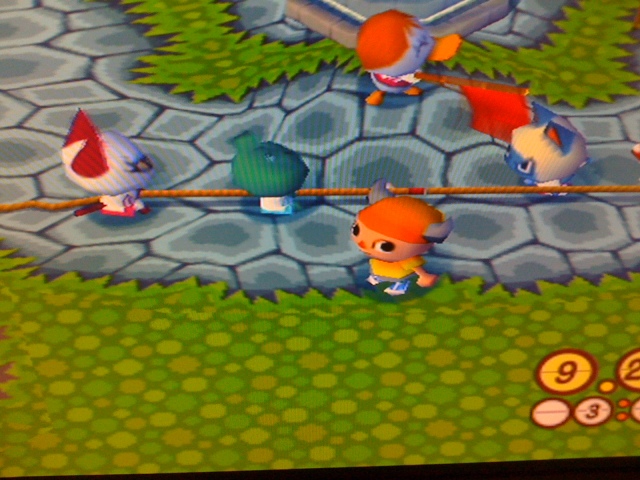 Local fauna’s also been affected by the change in seasons, of course, with new fish and insects making themselves felt around the village (and the first cockroaches scuttling into my home). Some of the new arrivals have made their way to the museum while other, more-familiar specimens have been traded with budding entomologists around the village (or just flogged to Nook for a tidy profit).

The strangest encounter of recent days, however, came not from Twycross but on a train to its neighbouring village of Serenity. Instead of the run-in with Rover that I’d been expecting, I found myself faced with some sort of nightmarish visage – a cat without a face, whose explanation for its absence… was that they’d scrubbed too hard.

Silent Hill’s got nothing on Twycross.

The abomination introduced itself as Blanca, and once we’d chatted I began to realise that:

a) You shouldn’t judge by appearances,

b) Blanca was actually quite an amenable sort, and

c) HOW THE IN THE DARKEST BOWELS OF HELL IS IT SPEAKING?!

Eventually, Blanca requested that I resolve the situation by – wait for it – drawing a temporary face onto their head until such time as s/he could find a permanent replacement. Unfortunately for Blanca, a chance to replace someone’s face means only one thing to an anime enthusiast of a certain age: 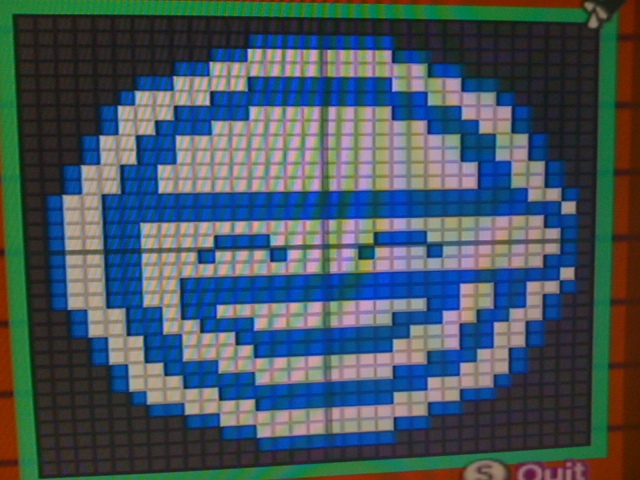 What I thought I’d do was, I’d pretend I was one of those deaf-mutes…

My on-the-fly editing skills not quite matching The Laughing Man’s, the result was a serviceable, if slightly stretched, hack-job. 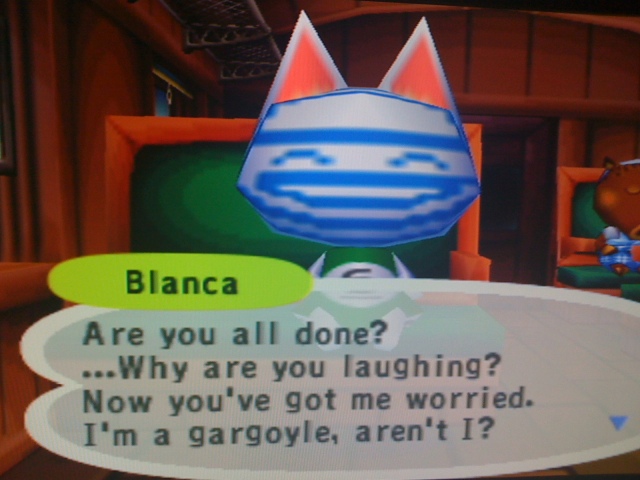 Blanca seemed quite happy with the replacement face I’d offered, and was later seen in Serenity wearing it proudly and terrifying small children. I felt as if I’d done a good thing, and it must have earned me some serious karma points, as when I returned to Twycross… Astrid had upped sticks and moved to Serenity! No more would I have to suffer her superior attitude and periodic attempts to scam me. With a soaring heart and a spring in my step from my adventures, I loaded up my newest K. K. Slider CDs and headed to bed for eight hours of faceless-cat nightmares and cockroach-induced panic attacks.

Game Designer and Writer.
View all posts by Taskbaarchitect →
This entry was posted in Animal Crossing. Bookmark the permalink.
Loading Comments...