Don’t talk to strangers. Never drink from anything that has a skull and crossbones on the label. Avoid bananas while driving. If you grew up alongside a Nintendo system, the odds are that Mario Kart‘s quirky rules will be etched indelibly into your brain. The series’ legacy is so entrenched in gaming culture that it can be tricky to remember the days before we learned  to power-slide, to drag a defensive shell behind us or to clench reflexively at the ominous trill of a blue shell. 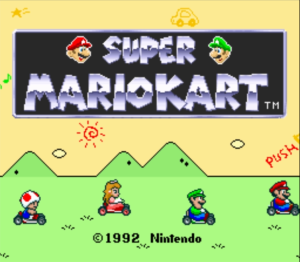 The child’s doodles in the background of some screens form an odd thematic bridge between Super Mario World and Yoshi’s Island. Coincidence? Probably.

Each new entry has become an expectation; whether you’re surrounded by friends in front of a TV or wedged uncomfortably on a crowded train, you know that sooner or later there’ll be a Mario Kart to enliven your evening or shorten your journey.  The titles have a unique advantage that make them immediately comfortable — by making Mario and his chums so ubiquitous, Nintendo has taught us all a convenient shorthand to understand the games it brings us. Whether it’s karting, golf or soccer, Bowser will never be anything less than a lumbering powerhouse and stars will always be things to covet and strive for. With Mario games, we appreciate something of the strategies available before we’ve even begun to play.

In 1992, attitudes at Nintendo’s Kyoto headquarters were very different. Rules around Mario’s presence in a game had relaxed somewhat, but his inclusion wasn’t being automatically considered. Instead, Hideki Konno and his team were busy prototyping a racing game that could deliver two-player simultaneous play (the recently released F-Zero had been a solitary affair) and were focusing largely on the implementation of this idea and the exploration of mechanics that would eventually become Super Mario Kart’s battle mode. Had the portly plumber not been added as an experiment, we might have been dodging oil cans as an overall-clad mechanic instead.

Mario’s inclusion didn’t sit well with critics of the time, either, with a few of the more cynical reviewers pondering what random pastimes Mario might be wheeled out to front in the future. In fact, the game as a whole received what Metacritic might call a “mixed reception”; UK stalwart Total! gave the game a grudging 50th place in their Top 100 Games, and other reviewers joined them lamenting the title’s perceived simplicity — although the battle mode was generally better received.

Coins remain one of the most divisive features in the series, rewarding certain racing lines but punishing poor players by slowing them down.

While it’s easy to dismiss these early judgements in the light of the series’ massive success in the decades that followed, with Super Mario Kart itself going on to become one of the SNES’s best-selling games, it was clear that while huge effort had gone into creating a deep and nuanced two-player game, the experience in single-player left a little to be desired. The AI drivers behaved in ways that far outstripped the abilities offered to human players.

While flesh-and-blood participants did battle with a limited supply of power-ups (placed sparsely compared to the game’s sequels) computer opponents were willing and able to unleash an unending supply of fireballs and other weapons. On higher difficulties they could be often by spotted sending projectiles out at right-angles to their direction of travel, or landing them effortlessly on the player’s head before avoiding a retaliatory assault using superhuman leaps and bounds.

Couple this with a baffling Rivalry system, where the “best” opponents were pre-ordained based on the player’s choice of character — any attempt to sabotage the running order would see the victims graced with impossible speed until they were back where destiny intended — and playing single-player Super Mario Kart could feel like bringing a sword to a gunfight. The aggravation that ensued was a precursor to the more-recent frustration felt when you’re scuppered by a blue shell launched by some inscrutable AI drone rather than the person sat next to you.

The quirks of the Grand Prix races were apparent even then, and revisiting Super Mario Kart today they’re even harder to overlook. Add a second player to the mix, however, and the result is transformative — you immediately start to see where the team spent the bulk of their time. The zip boosts and extra power-ups, eternally ignored by the computer, suddenly become hotly contested as you hurtle around the first lap looking to seize the low-hanging fruit; the dwindling coin supply adding to the frantic, grasping nature of each short race and turning otherwise unremarkable corners into risk/reward-driven dilemmas.

Even with the power-ups, a Super Mario Kart contest relies more on pure racing nerve than any other entry. Over time you’ll realise that the seemingly innocuous hop can carry you over oil slicks and even bananas, learn the different engine classes and the way they overhaul the worth of a particular racer (on 50cc, Koopa Troopa and Toad can actually be better off cutting across the grass) and be ready to memorise and sabotage the racing lines of your opponents.

While it’s possible to attribute at least some of the critical indifference to beleaguered journalists reviewing the game alone, there are a few other design choices that have quietly slipped away from future installments. In Super Mario Kart, just like F-Zero, players will lose lives if they don’t place in the top four — on the one hand this offers a do-over to prevent those last-minute accidents from ruining an otherwise flawless race, but it can also lead to an rookie player staring disconsolately at a greyed-out screen, inanimate in a supposedly “multiplayer” mode.

Not that a Grand Prix was necessarily the best way to spend an evening with friends. Time Trials may have offered long-term bragging rights but the game’s battle mode was a revolutionary experience for SNES owners. It preempted Doom and Marathon alike by bringing a form of deathmatch that only a few titles, like Faceball 2000, had even attempted — least of all on a single screen. Battle mode’s popularity has dwindled over the years, with the rise of the first-person shooter providing more elegant ways to hunt down your friends, but the value of its inclusion in Super Mario Kart should not be underestimated.

With its tight turning circles, lazy drifts and relative paucity of weapons, Super Mario Kart can seem twitchy and impenetrable to players used to more recent entries – the same entries scorned by the sort of purists that bemoan the series’ tendency to level the playing field. In its day, though, it was one of the more inclusive titles in the SNES’s catalogue — certainly the only video game I can remember my parents playing together — and for at least part of that we must look beyond the talents of the team, to Mario himself. From the visual distinctiveness of the characters to the intrinsically understood properties of outlandish elements like fire and ice, the tenets of visual design that underpin the Mario universe are as important to Mario Kart as the racing mechanics themselves. Oil cans? I’ll take bananas any day.

Game Designer and Writer.
View all posts by Taskbaarchitect →
This entry was posted in Gaming and tagged Mario, Super Mario Kart. Bookmark the permalink.