Animal Crossing 011 – This Is Halloween

Posted on November 2, 2011 by Taskbaarchitect

If my Animal Crossing avatar had been detailed enough, he’d have been sweating. Tonight was the night, after all, and while I was well-versed in the theory of the occasion, I’d had no opportunity to actually prove my skills out in the real world. Failure now, any aspect unconsidered or fumble of the controller, could spell disaster. The minute I stepped out of that front door, my safety net was gone, and all bets were off.

It was Halloween, and the clock had just struck six.

It wasn’t too many entries ago that I was bemoaning my exclusion from the villagers’ holiday antics. The Halloween festival, for the first time in my tenure, offered genuinely new gameplay opportunities – and a slew of new rewards to accompany them. 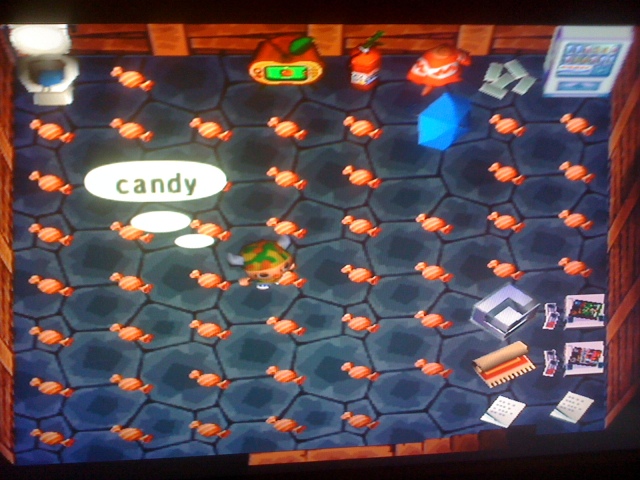 The rules of the Halloween ‘game’ are simple – while the village continues as normal, filled with fish to catch, bugs to collect and bells to unearth – the villagers are all dressed up in identical costumes, mimicking Jack the Halloween King. If they catch sight of you, a villager will do their best to track you down and, when they’re close enough, demand a piece of candy – the stuff Nook’s been selling throughout October.

If you surrender a sweetie, that villager will be satisfied for a little while. Refuse and they’ll play a nasty trick on you, transforming one of your items or dressing you in (actually rather stylish) rags. The rub, though, is that the real Jack is hidden in amongst the crowd. Approach him – he’s the only one of the revellers who won’t chase you – and surrender some candy and you’ll get a random, Halloween-themed item of furniture. Jack then teleports away, leaving you to start your spooky search all over again.

I soon discovered that finding the genuine Jack amongst his dopplegangers was harder than expected; the villagers had a nasty habit of lurking behind trees and springing out, or clustering around the real Jack so that I’d have to take the hit to reach him. By the end of the evening – playing cautiously, it took me almost two hours to use up the last of my candy – I’d managed to amass a decent collection, albeit with a few missing pieces and some duplicate items. That didn’t bother me, though – I had mercenary ambitions for the gifts of the Pumpkin King.

The residents of Twycross were back to normal when November rolled around, their magical and transformative powers no longer in evidence, and didn’t seem the slightest bit apologetic for chasing me through the forest the night before. Taking a photo of my spooky furniture for posterity’s sake, I loaded myself with gaudy orange furniture and headed to Nook’s.

Once there, I was delighted to discover that the furry rascal was willing to pay a staggering 10310 bells for each item – more than enough to clear off my outstanding debt! The moral of the story is clear; if you want financial solvency, bribe the undead. 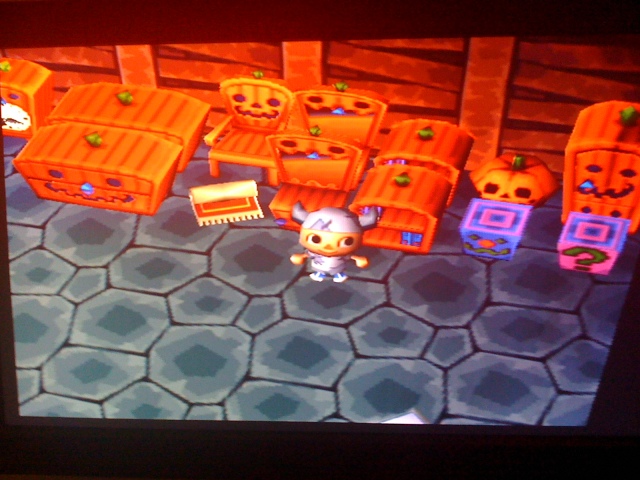 Nook promised to add an entirely new storey to my house – the final upgrade, I assume, unless my residence is going to end up teetering like a drunken spree in Tower Bloxx – and that it would be completed tomorrow while I’m out and about in the real world. In the nihilistic universe of Animal Crossing, stuff only gets done while you’re not looking.

Deciding that I’d better tidy up if I had the builders in, I returned to my house, diverting briefly to engage in a quick fetch-quest for Mitzi – one that resulted in a large table matching the rest of Robin’s house, ready for collection next time he wandered into my village.

Once home I replaced the basement’s usual items – vending machine, fire extinguisher, toilet – had a quick go on Excitebike and went to sleep. Halloween may have ended, but the promises of fishing tournaments and harvest festivals yet to come, not to mention an entirely new room to decorate, mean my residency in Twycross may last into 2012.

Wait. What’s this? Another letter from home. Let’s hope this one’s slightly more sane than last—

I’m leaving this one alone.

Game Designer and Writer.
View all posts by Taskbaarchitect →
This entry was posted in Animal Crossing. Bookmark the permalink.
Loading Comments...