Posted on November 17, 2011 by Taskbaarchitect

People occasionally complain that Animal Crossing, packed to the gills as it is with Harvest Festivals and Graduation Days, pays short shrift to the British calendar – most notably, there’s no animal equivalent of Guy Fawkes Night. This is true, but if you stand back and consider the occasion from an outsider’s perspective it’s a rather grisly affair.

Every November the fifth we’re bundling the kiddies up warm and ushering them outside to take part in a commemorative lynch mob – gleefully burning effigies of a real, albeit deceased, human being who thought he was striking a blow against the King’s religious oppression. (Fawkes wasn’t actually burned to death, rather, he jumped to his death from the gallows on which he was to be hanged.)

And for a cat, that’s doubly unpleasant.

With such a grim and relatively recent event underpinning the holiday, it’s perhaps not that surprising that Nintendo carefully disassociate themselves, saving up the fireworks (and the bonfires) for New Year’s Eve instead. I had reason enough to celebrate, though – Nook had stuck to his word and his magical construction fairies had added a second floor to my already-expansive house.

Deciding to convert the upper storey into a dedicated retro-gaming sanctuary (depressingly like my actual living arrangements) I lugged all of the NES games out of the basement – unfortunately, even when all lined up they barely filled a corner of what was now a very large and very lonely house.

Deep down I’d always known my house was a bit spartan (so-called because of the Greek warrior caste who owned very little furniture and only a couple of NES games). In fact, I’d get daily letters from the distant and damning “HRA”, an organisation devoted to sneaking into people’s houses at night and making bitchy comments. “Your house looks like a warehouse,” they’d proclaim. “Pick up your damn socks!” “Stop being so lazy and buy more dishwasher salt!” The gits.

Clearing my substantial debt, plus the occasional trade from Robin, had given Tom the incentive to upgrade his store once again, from a local supermarket into a ritzy department store known as Nookingtons. Deciding to examine his new wares and pick up some much needed knick-knacks, I stepped outside— 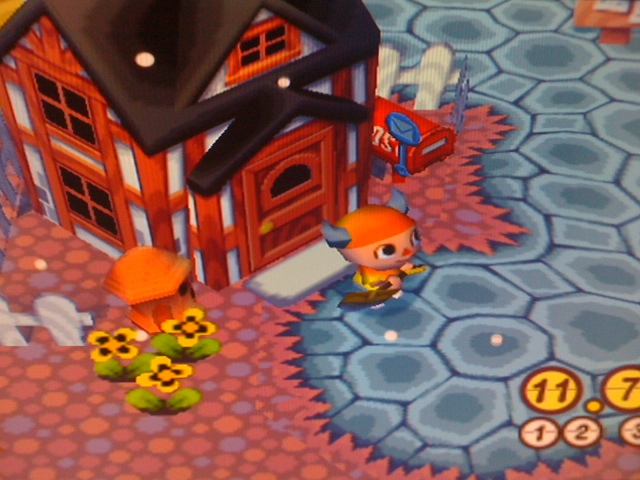 The M6 was already shut.

SNOW!! The bane of my suburban existence was drifting lazily from the sky in my Animal Crossing world, instantly reverting me to an excited ten year old. It was far too early for it to settle, of course, the flakes fluttering to oblivion as they approached the ground, but it was a welcome sight nevertheless.

Less welcome was the length of time it took to actually go shopping – Nook always forced you to trudge through the same old dialogue whenever you entered or exited his store, but he’d also hired two diminutive cousins to run the upstairs of his shop with some unskippable patois of their own.

In total, the daily stock check now requires you to hammer the A button through at least four unchanging conversations, each bubble appearing torturously one letter at a time in that classic Nintendo “style”.  It is, frankly, a bit of a pain.

The following Sunday saw some commotion around the village pond – there was a fishing tournament in progress, organised by a strange and rather disingenuous newcomer named Chip, who was simply eating all of the fish presented to him.

It couldn’t be just any fish, mind you; something of an epicure, Chip was only willing to dine on bass. Not small bass, not sea bass, not buttery biscuit bass – only the largest and juiciest river bass would suffice, which added an unusual element of strategy. Other villagers had already taken up most of the prime fishing spots, forcing some unusual angles and a number of failed casts before I was finally able to land a 23-incher and win some furniture.

The following days saw a succession of new villagers to replace Nibbles – who’d followed me invisibly to Serenity, and stayed there – and before I knew it I’d maxed out my population, which causes Mayor Tortimer to shamble around in a drunken stupor building random bridges when you talk to him. My favourite of these new arrivals: a grouchy pink bear named Vladimir.

My first conversation with the lovable grumpster ended with him demanding I select an amusing speech affectation with which he’d pepper his sentences.  Hmm. What, I asked myself, would Nintendo president Satoru Iwata do in this situation…

“Then we thought, is it okay to change this so easily?”

Well, that cheered the place up a bit. With my village at maximum capacity and winter on the way, life was looking pretty rosy in Twycross. And yet a cloud was looming on the horizon – my village was about to face its greatest threat yet… 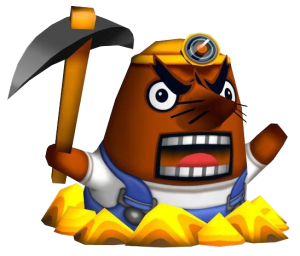 “Hey! How come I’ve not been mentioned in this blog yet, huh?!”

No, not that. Nintendo’s big bruisers were on their way – Mario and Link were here to claim the holiday for themselves, and they’d brought backup in the form of Skyrim and Arkham City. Would Olivia and Totakeke really be able to battle Batman for my attentions and claim my diminishing leisure time? And if they failed, just what would happen to the utopia I’d crafted?

The battle for survival had only just begun…

Game Designer and Writer.
View all posts by Taskbaarchitect →
This entry was posted in Animal Crossing. Bookmark the permalink.